The oversimplification of matters

Most things in life are ordinary but we do a good job complicating them. (It is probably the only job we are willing to do without getting paid.) On the other hand things that are quite complex we tend to take lightly. Shall we call it the human way!

What am I referring to? Well, stereotyping. One dictionary define it as ‘a set of simplistic generalizations.’ It has been around for ages. (They even taught it to kids. Will return to that later.) A typical stereotype that you might hear today is: “People who wear glasses are smarter.” Preposterous isn’t it! Or if you live in america: “Police officers like doughnuts.” In general it seems that life itself is a stereotype. Your are born, you grow up, go to school, get married and get children (not particularly in that order), become old, die…

The origin of the word “stereotype” is apparently from Greek. (I am sorry, but the Etymologist in me was awoken.) Interestingly enough, this term have been used mainly in printing. But the word has taken on a new meaning today. The only printing it represent now, for many anyways, perhaps is what has been imprinted in theirs minds.

In a children’s nursery rhyme that was published in the 1800’s we see another typical stereotype that made it all the way to the 1980’s or perhaps even the 90’s. You know the one: 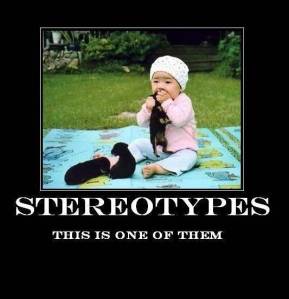 This children’s rhyme reveals the Gender/Age stereotype that existed in the 1800’s, and every boy had to learn it by heart. (How cruel can you be!) People believed that every boy was mischievous and no good, while girls where the favourites. This belief was almost universal. In the 80’s, while growing up in the northern Namibia, this stereotype of boys was alive and kicking and perpetuated by almost every grown up. They also claimed that boys were no good and that they would not turn out to be useful members of the community. And that, boys would only become “Botsotsos” (meaning criminals, mostly in Namibia and South Africa). But at least they didn’t teach us to rhyme it. Such views can almost become self-fulfilling prophecies. For one, because these boys could have given up on themselves and think that they have no choice because they are doomed to this one bad destiny.

Wow! Just imagine that, gender determines how you turn out. Really!!? That’s deep!

That was the stereotype of the 80’s and past centuries.

Fast forward to the 21 century, and you find the reversed stereotype, same as in the past but now targeting the girls. They are now also believed to be no good, that they will only become loose women by the time they hit their teenage years, if not bearing several children out-of-wedlock by then.

To keep entertaining such stereotypes is nothing less than a disaster. To me it is an indication that, we, the adults, have given up and we see no way of addressing what ever issues are there in the lives of girls that lead to this stereotype; and to give up on the girls is to give up on mothers of tomorrow.

We don’t need to guess what the outcome will be, the result is almost predictable. Their confidence will leave a lot to be desired, their willingness to take responsibility will be lacking. While this is not a study but simply an opinion post, the conclusion cannot be far off.

I couldn’t have said it better myself… click here to read the rest of the article.

Dictionary.com defines introvert in a couple of ways. The first definition it gives is “a shy person”. I happen to disagree with this definition, especially since it defines shy as “easily frightened away”, “suspicious”, “distrustful”, and “reluctant”. The second definition offered is “a person characterized by concern primarily with his or her own thoughts and feelings.” I agree with the second definition more than the first, although the second one kinda makes it seem like introverts are self-centered. Normally, dictionary.com is my friend. But sadly, it has failed me this time.

Honestly, the first time I’d ever even heard the word “introvert” was when I was subjected to the Myers-Briggs Type Indicator assessment (MBTI). It wasn’t until later that I actually learned that I was stricken with this “ailment” called introversion.

If the creators of the MBTI were…